We have started our journey along the south coast few days ago. It has been a very interesting experience about which I will write later, as at the moment battery life in our devices is very limited.
However it would be selfish not to share the latest experiences. We left Skaftarós, where we spent a night to continue west along the coast. The morning has been pleasant, green dunes and blue sky made the landscape look great. Three hours into the paddling the headwind started, as always a bit earlier than forecasted. We were aiming for the Stadarbót lighthouse, hoping to make it before the even stronger wind. Just as the lighthouse came into view the wind picked up more and the sea started to become lively. We had to cross the Mýmatangi point, a place where a huge river hits the sea. This changed the colour to brown and steepened the waves. We pushed on.
Once we cleared the river flow, it became clear that we won’t make it to the lighthouse, which wasn’t getting any closer. It was time to land. We hopped through the surf and landed in some dumpers, but all good. With grassy dunes long gone, everything around was black, the sea, the sand. 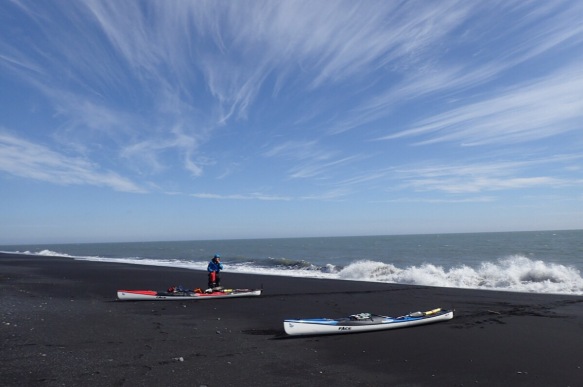 We checked our options, according to the weather forecast there didn’t seem to be any window long enough until next night. We decided to put the kayaks on some inland water and pull them along towards the lighthouse and the emergency shelter, sometimes we could walk on the shore and sometimes we had to wade in the water, some places it was up to our waist. The wind and current were making paddling impossible. We were hoping to be able to avoid camping in the sand storm like conditions. After about an hour we run aground, so took the kayaks out and decided to walk and see if we can make it to the lighthouse on foot. After another hour we saw that between us and the lighthouse is another big river, which isn’t on the map. We realised that we were on an island between two muddy glacial rivers and sea. Unfortunately no drinking water, and we only had few litres left.

We returned to the kayaks and pitched the tent, in the wind everything including us was slowly turning black.

We were woken up by calmness in the morning. We had two forecasts both predicting strong winds in the early afternoon, one sooner than the other. We decided to wait for the night window. After late breakfast, is was still calm, we checked forecast again, the night window was gone. What now?

After a while listening to the calm, we made a snap decision to go, to leave, to hopefully reach the lighthouse. This is very unusual for us, for we need time to plan, proceed and to commit, especially when conditions are difficult. But here, we were on the water, launched through the surf in one and half hour since making the decision. Kayaks were one hundred metres from the water serving as shelter for the tent, tent was up, stuff everywhere, everything covered in black. 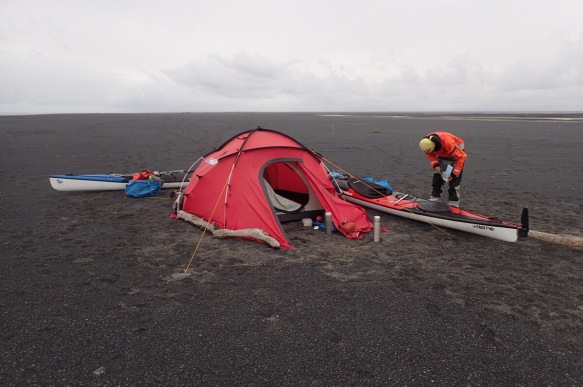 We marvelled at ourselves.

It was calm on the sea, and we were toying with the idea of going beyond the lighthouse and committing ourselves for the push towards Vik. It took one hour to reach the lighthouse and paddle across the river mouth. In that time the waves coming from the sea got bigger suggesting it being windy somewhere close. We contemplated for a bit. What would we gain by continuing to paddle, what would we loose, and what would we be risking. We decided that if we continue, we may make it to civilisation, drinking water, comfort, but also we could loose a lot. If we were to land it would be somewhere nowhere in bigger conditions and no drinking water, and no escape option, and that only if we managed to land. If we land now here, we could get shelter, hopefully drinking water, and potential escape route via a dirt track.

We landed through a surf again, already quite interesting. It took about three hours to get our stuff from kayaks to the shelter across a stream and lava field, we both had to go twice. 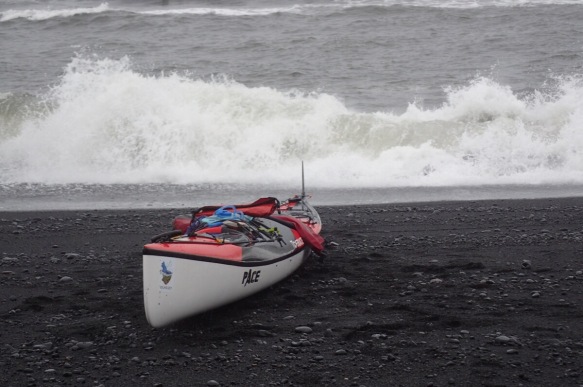 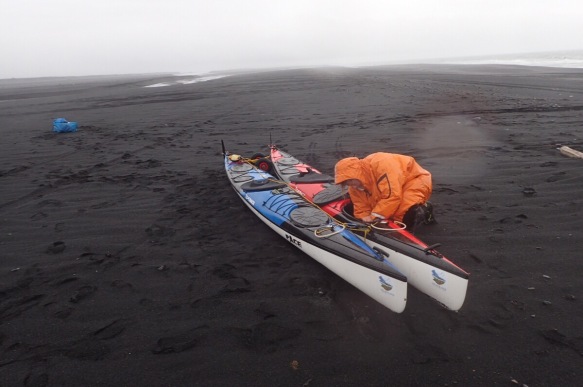 The forecast for the next few days looks very unsettled. We have food for the next six days. After that, we will see what next.