Although day to day life seems to go on slowly here in Alaska, some things can change very fast, and for once, I don’t mean the weather. After three full days sitting in the Bearfoot Inn in Cold Bay all our hopes turned to Tuesday. On Tuesday the wind was meant to clam down. Tuesday was also the original day when Freya and I hoped to be paddling. And so Tuesday morning we went again to the airport office to find out whether there would be a plane to Nelson Lagoon. Really, we could phone the office, but since the airport was just across the road from the hotel, we decided to go there personally, same as many times in the past few days. The response was the same as we had several times this week, shrug of shoulders, nodding heads, pained facial expressions. No, it didn’t look like there would be a flight that morning. Back to the room we went, for another session of WiFiying, reading and what have you.

Suddenly there was a commotion in the corridor, Freya burst in and saying that we got the phone call, we were to flight immediately. Such was our excitement that I left my bananas there, in microwave, where I stored them due to lack of space. They would be dearly missed later.

However, we were flying to Nelson Lagoon! When I researched it, I found the following information: “Nelson Lagoon lies in the maritime climate zone. Frequent and erratic weather changes occur, with constant prevailing wind of 20 to 25MPH”. Add the period of strong wind gusts on top, no wonder it took us so low no to get here.

The village is located on a long sand spit with Bering sea on one side, and lagoon waters on the other. I liked the Lagoon when we finally stepped of the plane and were driven to the village. It took a while as the plane has been the first one after few days, and the locals were all waiting for their deliveries.

The place has a real village feel to it despite being fairly new, from the 1960s’, it has been the only Aleut settlement on this side of the peninsula, and in the past was used as Unangan summer fish camp. And one more historical fact from wikipedia: “The lagoon was named in 1882 for Edward William Nelson of the U.S. Signal Corps, an explorer in the Yukon Delta region between 1877 and 1920.” We met local policeman, the settlement only has 35 people living here permanently, but they do have a police man to prevent crime, mainly related to alcohol consumption. Of course my biggest interest was the school building, but it shut in 2012 as no kids live here now. 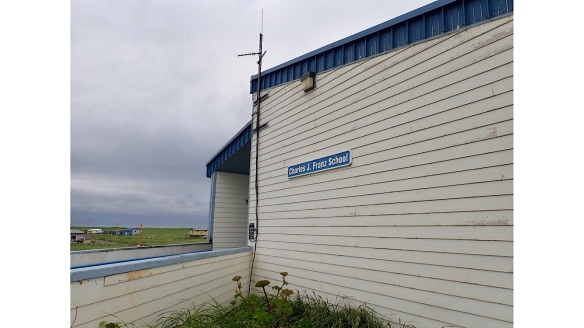 What I really noticed about the place was a lovely smell of plants, after Cold Bay, it had a real summery feel. Such, that we went for walk despite warning of bear being seen in the area. Fortunately he was seen more on the airport side, probably also picking up his deliveries, so we went the opposite direction. 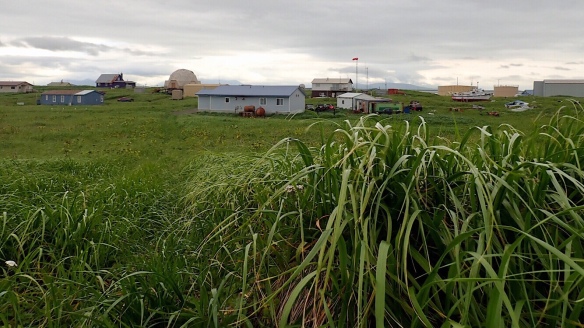 However most of the day was dedicated to food sorting, boats’ preparation and setting, and kit packing. We decided to take the opportunity of tiny lull in the wind and leave in direction of Port Moller on the other side of the Lagoon. One more thing was great about the place, we had a place to stay, the Bering Inn, a self catering apartment courtesy of Justine.