We arrived to Port Moller at 10.30 in the morning, and were surprised by the hive of activity here. The information that Michal and Freya had from previous trip was that Port Moller had nothing going on there as it burned down. Luckily, what we found here was a great opposite. 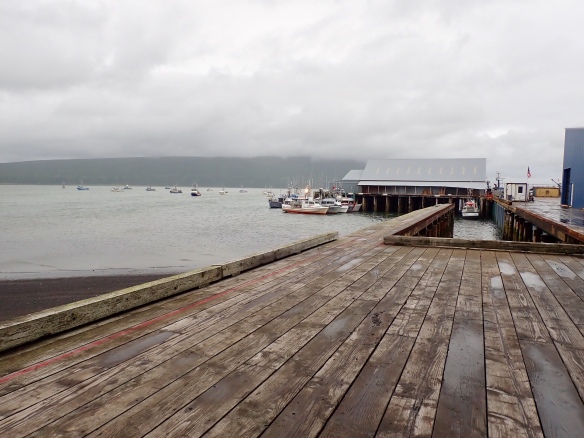 Port Moller has a very convenient position in the lagoon, and is sheltered by sandy spit. A cannery was opened here in the early 1900’s. Nowadays it specialises in fish processing and freezing. It’s run by Peter Pan Fisheries, whose manager Garry was so kind that he allowed us to stay here, gave us beds and invited us to meals. As we would be here for few days due to the weather, it was a welcomed offer.

We were surprised at how extensive the camp was. However it’s all surrounded by electrical fence, so of course when we were moving stuff and boats in, and I had to close it, I got a big electric shock. At least I know how the bears may feel.

The whole place built on sand dunes is on stills and has wooden walkways. There are quite a few workers and fishermen, so it also has a store. Unfortunately last August, almost on its centenary anniversary, part of the original dock and plant burned down. This means that ow there are also several construction workers rebuilding the place. This is why Sacha’s husband has been here, as it is his company doing the work. 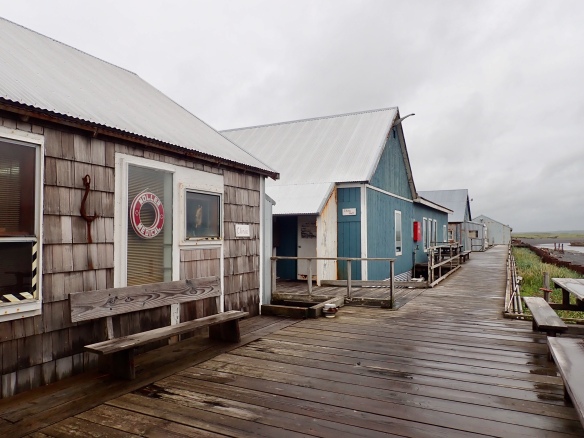 We settled in and went for our first meal here, the lunch. The dining hall is the best place where to meet people, and find out many interesting facts about the area.

We were treated to two rides out in the funky little 4×4, they happen late in the evenings, when the low tide provides the highway.

On the first ride we rode to the other side of the bay in the lagoon and to the nearest headland towards the open sea with Sacha and Aaron. Of course, Freya got to drive, too. 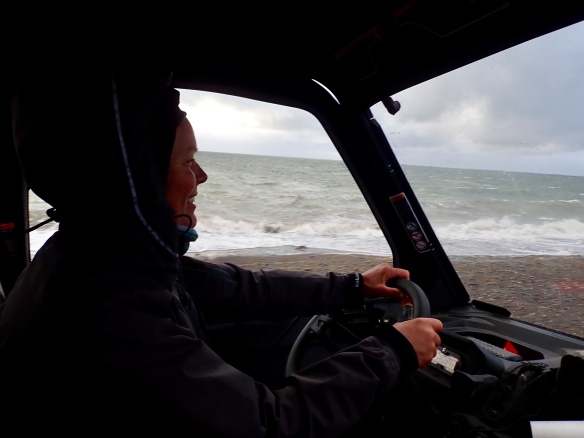 The second evening we were first taken on a tour of a fishing boat Nancy Galley crewed by Tony and AC. All very interesting, I was surprised to see how little they can see out of the window, so will be even more cautious next time I see a fishing boat close on the sea. 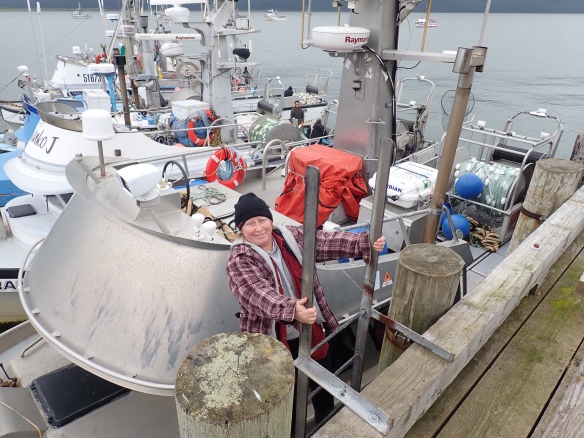 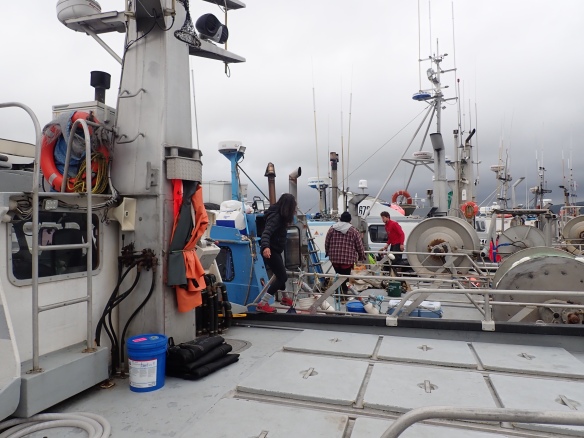 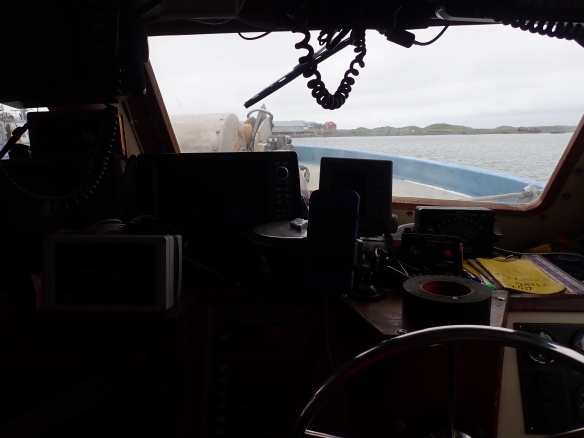 After that it was time for a second ride out in the car. We went to the top of a hill this time to the site of the former radar station of the Cold War United States Air Force Distance Early Warning Line. It was built in the 1950’s, and deactivated in the 1969. This was also a reason why Port Moller had an airport built, or rather a gravel runway. Unfortunately it has been foggy most of the day, so the view over the bay wasn’t the best.

On the way down we stopped by the original dam which provided drinking water for the camp, now destroyed. And then drove past the current water source, a well. 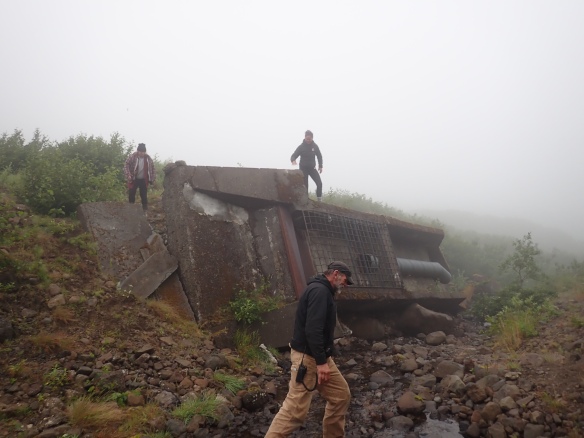 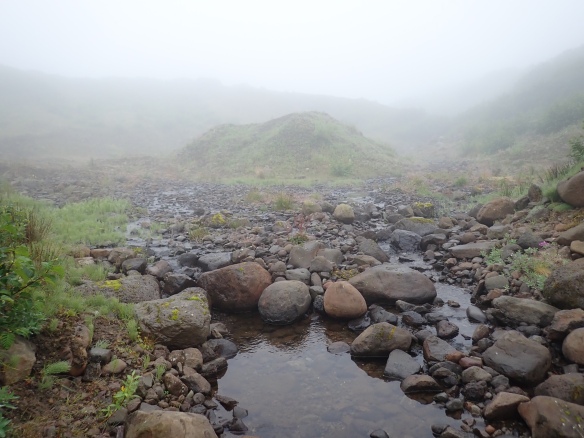 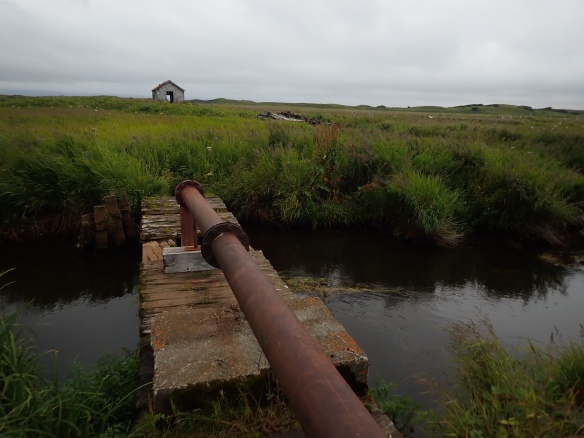 Similar to the previous trip when we saw sea otters, and eagle, this one was rich in animals’ sighting. We saw a moose standing ahead of us on the path. Sadly, no photos of it.

I was also treated to the sight of my first bear. Now, that was exciting, because really, I’ve never seen a bear out in the open, yet, the circumstance where we saw the bear were a bit sad. The bear was actually coming to feed on the barbecued trash that is being regularly burned in the dunes behind the compound. So we saw it behind thick smoke, eating something from the the pile. 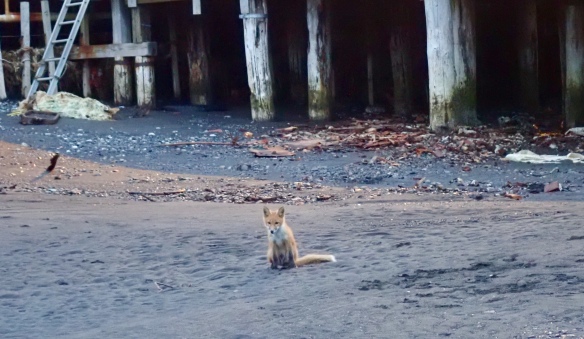 The animal safari was finished by watching Port Moller resident foxes being put to sleep by Randy’s lullabay on harmonica.

The evening was finished by a visit and a tour of a fishing trawler, the one that collects all the fish from the little fishing boats out at sea. 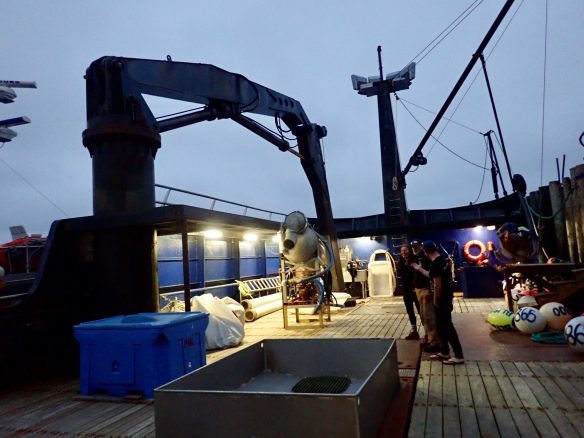