The weather has been favourable to a point that Lindsey would check forecast and almost sight that there isn’t a rest day to be seen. And that is good as we felt we were ready to put some miles in. The weather forecast didn’t always deliver the promised low winds but we enjoyed the occasional headwinds nevertheless. Well, most of us.

Our flight started with crossing from Bolus Head in county Kerry just short distance south of Portmagee to Dursey Island. Long crossing with the possibility being broken off by landing on Scarrif Island. Sadly the swell was lively and we could not make landing on steps apparently carved in cliff by monks long time ago. 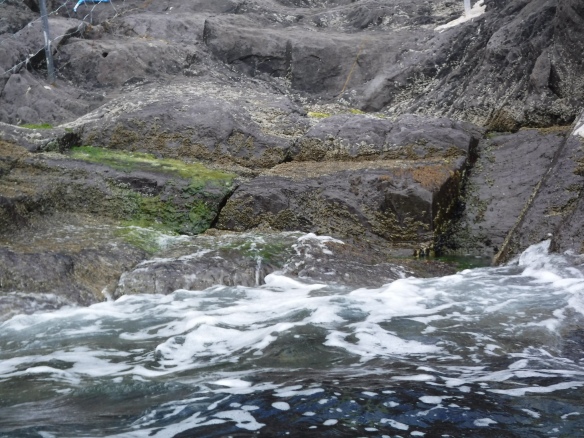 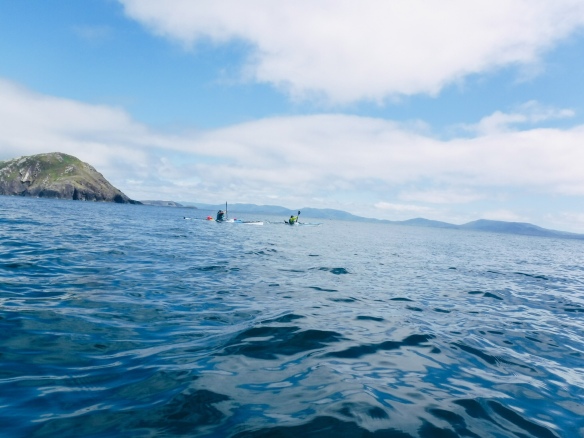 We had quick break on the water on the south side of the island and continued towards Dursey. We spent two days in Portmagee as we were waiting for conditions to improve for this crossing. If we had doubts the day before, we were happy with our decision as the calming sea changed significantly the closer to Dursey we got. We surfed into the sound and looked for place to land. We decided to land on mainland side of the sound. With the only Irish cable car over sea water overhead we made to the slipway.

Zoe approached the slipway first, but suddenly started to slide back into the water. I wanted to help her, so approached the slipway, jumped out, and only as I started to slide back into deep water I heard warning of it being very slippery. Zoe had drysuit, I had dry trousers, my cockpit filled by dumping wave, yet I managed to jump back onto the boat before the water reached my waistline. I was floating on top of my boat, Zoe was swimming to the shore, Lindsey landed on steps in almost civilised way. People fishing on the pier had no idea of the evolving drama. Fortunately eventually Zoe reached the non slippery part of slipway, my boat drifted to shore, and Lindsey came to help to recover casualties. After coffee, tea and ice cream from the cable car car park we were ready to launch again and push toward White Ball Head.

We left White Ball Head into a calm sunny morning, ahead of us was a long crossing across Bantry Bay followed by Dunmanus Bay, we decided to go straight for Mizen Head. The sea was flat and we settled into a rhythm which will be broken by sips of water, snacks and occasional closing and opening of drop seats, we had twenty kilometres to do. The views were great, Bear Island, Sheep Head, Mizen Head, lighthouses, sky, occasional yacht, then the dolphins appeared.

Several different pods, coming closer to us, some of them jumping high out of water, some going right under our kayaks. Where crossings go! It was one of the most pleasant ones. Mizen Head came and went, but with nowhere to land we had to continue further choosing Gully Cove as our late lunch stop.

In the end we didn’t make it quite there, and landed in dead seal tiny cove. As the dead body was floating closer to us on the shore, we decided to bring our lunch to early end, and paddle off. Gully Cove looked very inviting, sun, campsite, probably coffee and tea, too. Unfortunately it was a bit too much inshore for our liking, so we decided for another almost twenty kilometres paddle across to Cape Clear.

We were in luck, wind and tide were helping us on the way, Isiah coast passed by changing on the left, the Fastnet lighthouse staying constant on the right. Cape Clear harbour was basking in afternoon sun enjoying late Saturday evening.

The following day we started into headwind and tide, yet eventually it settled behind us and we paddled one of our longest day all the way to Long Strand at Gully Head.

There isn’t much that is worth to report on from this leg, maybe the state of our lunches. We started with one little dry bag. But suddenly Lindsey was pulling dry bags, number of tupperwares and random bits claiming this all was lunch. Lindsey does carry our food. It’s good really!she paddles slower that Zoe and I but if we want to eat, lunch or dinner, it is in our best interest she gets where we get to, and too far behind us. 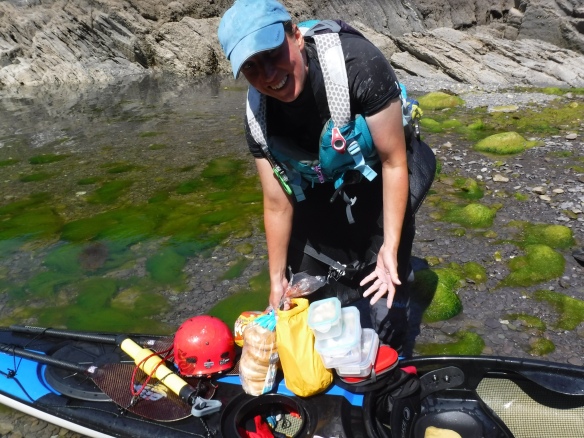 We landed on a beach, not great, a bit surfy, but closest to our next target the next day. The sign said no camping clearly, fortunately coming from the sea we couldn’t really see it. We went to hide in by the river, yet there happened to be quite a community of random sleepers, some in vans, some of us in tents. We ended up with a bottle of rose. 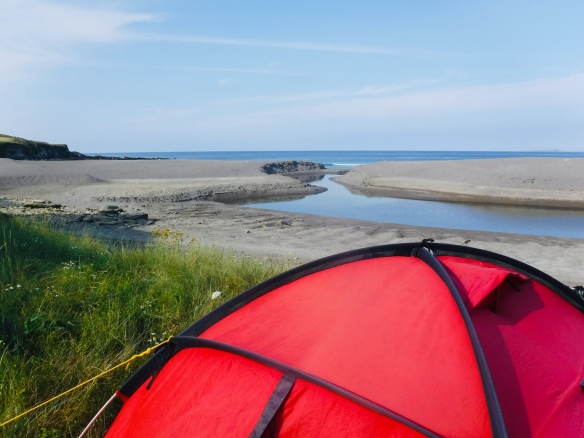 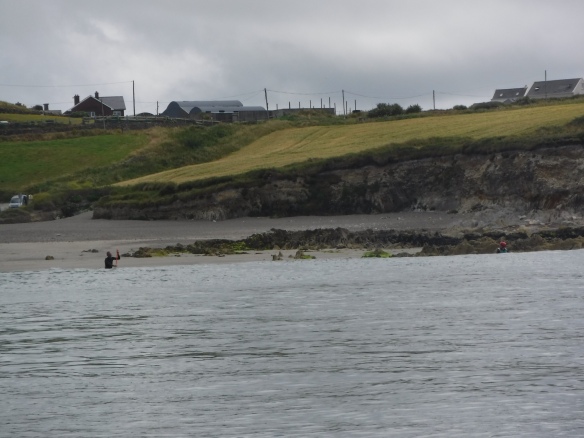 Surfy beach is a surfy beach and in the morning we put our helmets on hoping it would be only this one time on this trip. We had another long day ahead as far as we could go. Yes, at the moment distance is our main focus. Progress was slowed down by headwind again, and we ended up rounding the magnificent headland of Seven Head and arrived to a beach. As often we didn’t know the name but that it was camping kayakers friendly. Someone was watching us landing, we were worried it was someone on whose land we would need to pitch. To our surprise, later a man called Pat turned up welcoming us on Blind Strand bringing us beers. I think we like it here.

Blind Strand was also an important place as we could meet Chris, who used to paddle with us in London, currently based in a Cork, but suddenly turned into support crew. We happened to be reduced to one tiny gas stove, both petrol MSR and gas one giving up on us. Chris brought us new stove, more gas, and a surprise Swiss Roll. Amazing. 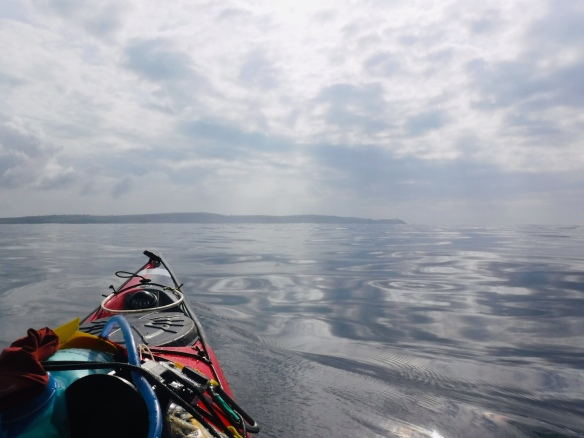 The Old Head of Kinsale was our next target. In our hastiness we only realised it was time to say good bye to Atlantic about five kilometres before it. We read in the guide book that apart of several different tideraces running alternatively on the west and east going tides, it also had some tunnels through. And since we were paddling against tide since early morning we decided we were going through them. 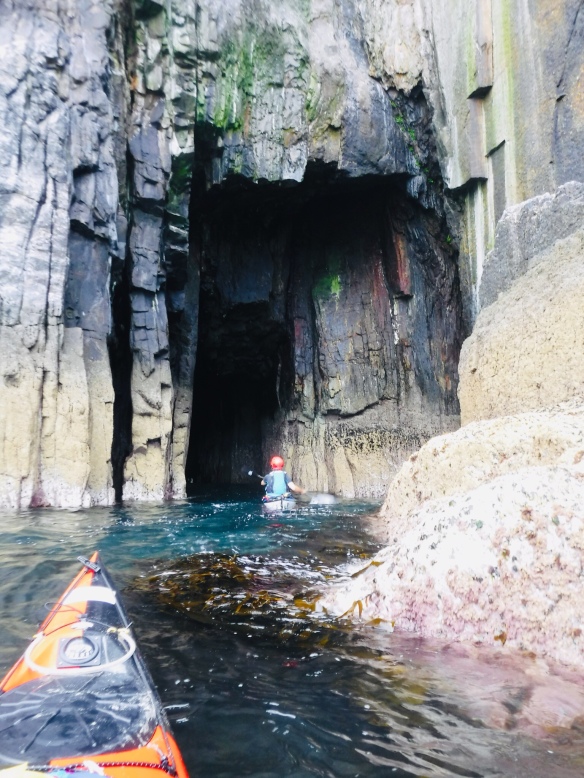 What an experience! Not really sure of the actual distance, but we were surfed through a very narrow darkish space for at least 100 metres, and emerged in Celtic Sea. Wow! 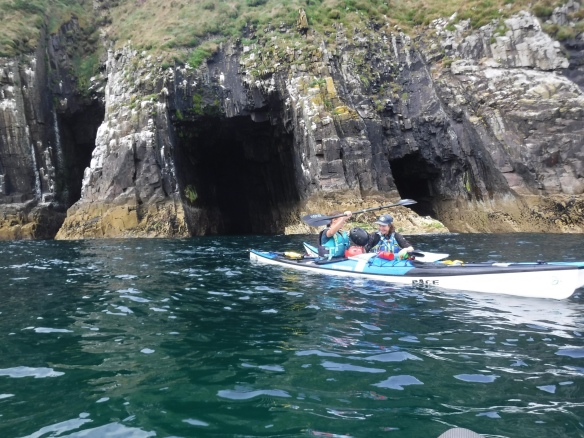 What followed was one long day, the longest by hours spent paddling, almost 13. We seen a lot of coast passing by, stopped in Man of War cove, then crossed Cork Harbour. 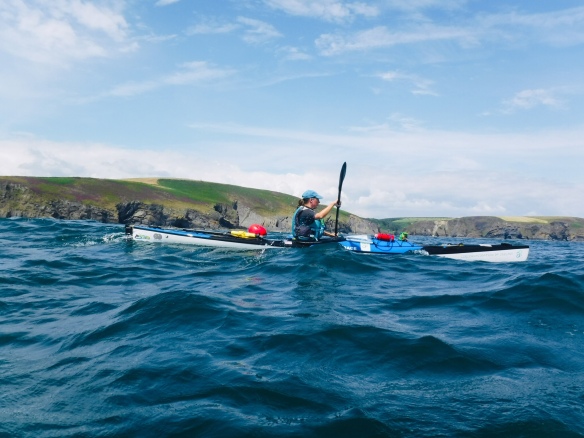 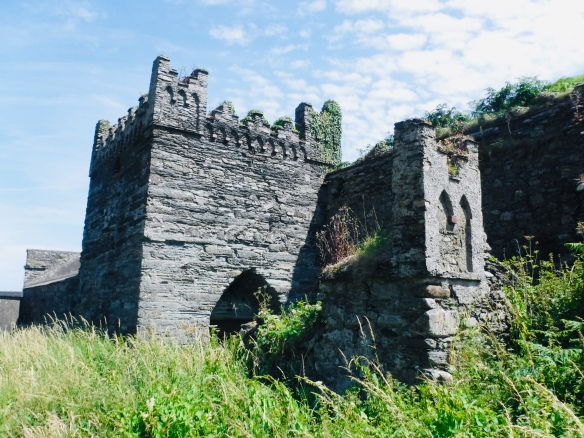 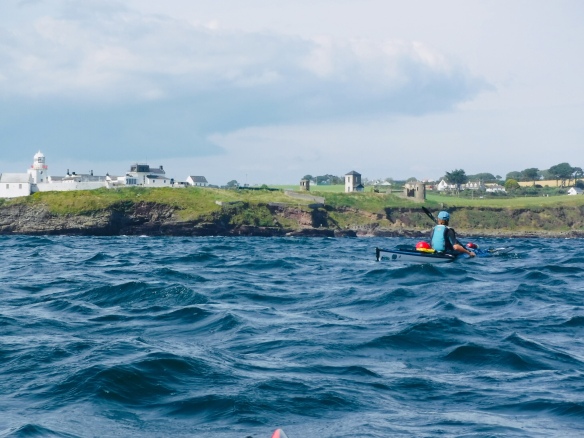 The last stretch to Ballycotton was a trying and tiring one. We were pushed by tide and wind, yet, it just felt very very long. Eventually we arrived. 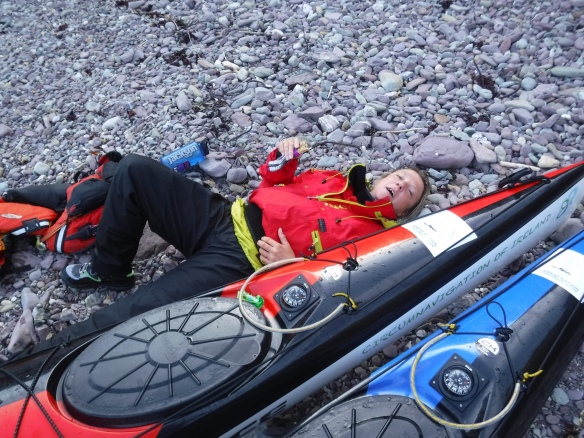 It was hald past nine in the evening, we were hungry, tired, all we wanted was to have food and go to bed. Yet, when expeditioning it’s never straight forward, the boats need to get above the high water line, the tent needs to be pitched, the food needs to be cooked. Important is to keep the spirits high.

Pitching in busy harbours in biggish places is challenging, we were lucky to find a patch of ground to squeeze ourselves on. We already knew we would be here for two nights.

Ballycotton is a former fishing village. Very often our trip is not really about places we see, but people we meet. Towards the end of our weather day Lindsey met Clare, local artist and volunteer at RNLI station. Lindsey bought a lovely picture, and we all ended up having a shower in the art gallery slash hallway slash artist’s home.

One more information to add. Ballycotton has a view of a lighthouse on Ballycotton Island. We saw plenty of lighthouses, but this one is a black one. There are only two black painted lighthouses in Ireland, we passed the other one weeks earlier when rounding the Slyne Head.

2 thoughts on “ARE WE FLYING?”